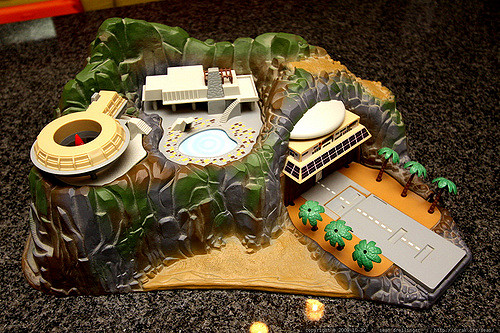 (All names changed to avoid embarrassment).

In 1992, there was a surge of demand for Thunderbirds Tracy Island which meant all the parents rushed about to buy their kids one. Except us as we didn’t have much cash at the time.   Of course, Henry, the rich kid in the class, had parents who bought him the first one out. He bragged about it for weeks. Our kids had already learned the valuable lesson that there is no point wishing for something if you know there isn’t the money. However, bless Blue Peter, they showed you how to make one. Click here to see a 90-second version of how to make Tracy Island.

Well, we spent most of the weekend making it with our 8-year-old son, Sam, and 5-year-old daughter. It didn’t look quite as wonderful as the Blue Peter version…a bit raggedy and obviously homemade. However, all the doors worked, and to the kids, it was a wonderful achievement.

Sam went off to school bouncing with enthusiasm on Monday morning.  Although Henry took great pleasure in saying that his “proper Tracy Island” was much better than Sam’s.  Sam is a natural Tigger and just ignored this.

Sam came out of school beaming and announced  “Teacher heard us quarrelling about Tracy Island. Tomorrow, Henry and I have to bring in our Tracy Islands. We are going to debate about which is the best.”

My heart sank as I thought all the kids would think the bought one best. I tried to hide my pessimism. The next day, Sam was so proud as he walked to school bearing his beloved Tracy Island. I spent the day thinking about a treat that might cheer him up when he came out of school with his pride in tatters. Mentally, I cursed the teacher for suggesting a debate and wondered how to explain that sometimes money wins.

I should have had more faith in the teacher. Sam came bounding out of school “Mum, Mum they all thought my Tracy Island was better than Henry’s”. Although it may have been that most of the kids weren’t keen on Henry, it may also have been the questions the teacher asked.

Sam said ” they said it was better because no one else had one like it. If it broke I could fix it, and I could use the money I saved on other things.”

A Valuable Lesson for Mum

So there I was trying to teach my kids that shop bought things weren’t always best, but not really believing it myself. Thanks to a considerate and thoughtful teacher, not only did all the kids have a chance to discuss what was valuable, I too learned the lesson. It was one of several instances which reinforced my desire to learn more about how powerful questions can change attitudes. That’s why conflict resolution attracts me–asking questions that make people think.