I have always loved Christmas, so decided to write about Christmas traditions in our household.  I used to get so stressed about it until one year I was too ill to bother–and you know what? We had a lovely Christmas without all the fuss! So we do the stuff we enjoy and that brightens lives and forget the rest. Some of our crazy (and cheap) Christmas traditions below: 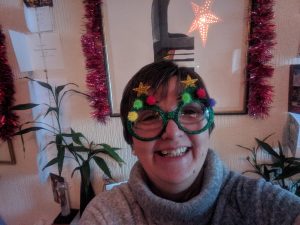 Growing up in a third world country meant that tinsel, shop bought toys and clothes were a rarity. And when my kids were small, we didn’t have very much money. Yet many of the traditions from my childhood and cost-saving measures have become the best part of Christmas for all of us.

Our Christmas cake is a prime example. I always make the cake from a recipe given to me by Jean. She was a treasure–one of those people who is kind to everyone and always cheers you up. So baking the cake makes me think of Jean and smile.

Imagination grows when you don’t have much to work with. The children started decorating the Christmas cake with a few Santas and penguins, plus some toys were used as well. Each year another one or two were added, and each year, they thought up a new theme. There was the airport, then Lord of the Rings, Vampire Penguins, Midsommer Murders, Downton Abbey, the Olympics, Strictly Come Dancing, The Worlds Strongest Man and the Great British Bakeoff. Using your imagination, work out the themes for the Christmas cakes shown below. 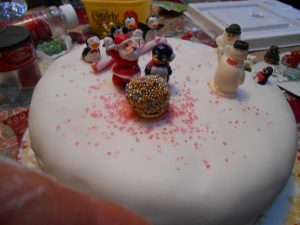 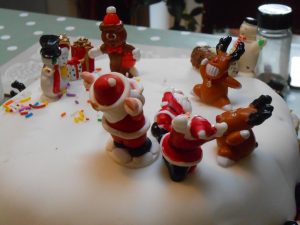 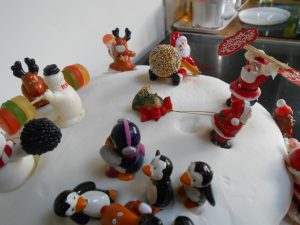 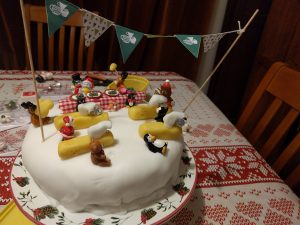 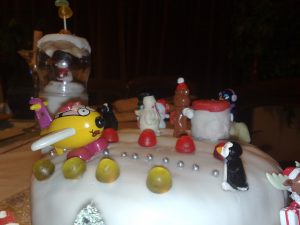 And, of course, we still do stockings. 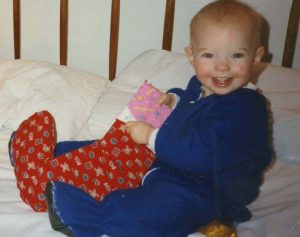 And if you shop at charity shops,  you’re raising money for good causes. And you can make a double donation by taking the things back if they aren’t a hit!  It’s environmentally friendly as presents get recycled again and again. As a mediator committed to ensuring that I minimise the impact on the environment of every mediation I am involved (signed up to the Mediators Green Pledge), as well as doing only connected mediations (online, phone or email) I want to do what I can in the rest of my life.

Twenty five years ago, as instructed by Blue Peter, we made a nativity set out of toilet roll inserts and scraps of paper–we still use it. Children love playing with it and we can always make more figures if there are any over-enthusiatic reenactments. 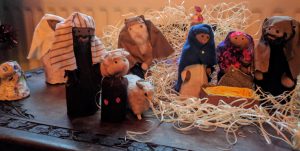 Of course, the village midwife attended (just behind Mary with the blanket), as in my past I was a midwife. Baby Jesus is still up in heaven with the angels.

Whichever child woke first  on Christmas morning raced down to put him in the crib. In fact this happens even after they have grown up!

Each year, we could add more characters or replace them. A certain small blond 3 year old girl insisted on a golden-haired princess to travel with the magi. 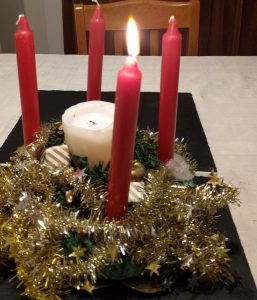 And the equally ancient papier-mache Advent Wreath kept three small people out of mischief one rainy day.  Abundant tinsel disguises its many knobbly bits and it still serves its purpose decades on. 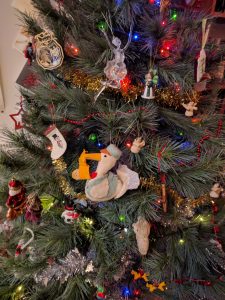 Our tree is not glamorous or colour coordinated, each ornament tells a story.  The stork was given to us 36 years ago on the Christmas before our son was born.  We have an annual competition to see who can find the most hideous or amusing ornament for a pound or less in a charity shop or home made.

Several years ago, I started crocheting ornaments from random scraps of wool. 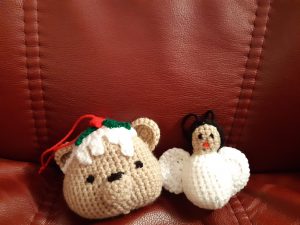 I gave in to temptation one year and crocheted a very weird ornament  for my son who is a Dr Who fan…a sleeping angel (one of the scary ones).It is truly hideous so I won’t give you nightmares by showing you it. I also learned about the tradition of the Christmas pickle so perhaps that will make a crochet project this year.

John Julius Norwich’s Christmas anthology is full of Christmas stories from a range of households.

Whatever your Christmas traditions, I hope you have a good time with friends and family. If relations are strained, here’s a few tips.