Why do misunderstandings occur

Our brains are continually trying to find patterns in the world and other people. If we spot a pattern, it makes us more efficient because then we can take action at the start of the pattern. This gives us a fractional head start over competitors. 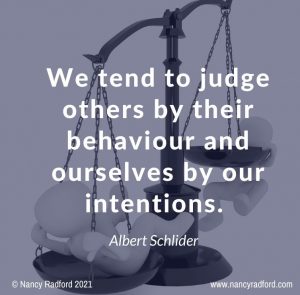 We know that our own intentions, but as we are not mindreaders, we make assumptions about other peoples intentions from their behaviour.   We leap to conclusions and tell ourselves stories about why they did something.

As a mediator, I see many conflicts arising from conflicting “stories” people have created from the same situation.  Each party sees  their story as “the truth” (more on truth here) and the other party’s story as a lie Then they try to spend more time on proving the truth of their story, than in seeking understanding.  Here’s a tale of a small misunderstanding which could have ended up in a neighbourhood dispute.

It was Joe’s birthday.  I thought I would cheer him up by dropping off a homemade cake. I wasn’t too sure where he lived–we had dropped off a Christmas card and we hadn’t had one back. So I texted to check that he had received the card.

He said he had. So we walked round to the house where we had put the Christmas card. No one was in, so we hung the cake and birthday card in a bag on the door.

I was surprised not to get a thank you.

Then, the next day we got a text to say that he could pick the cake up… I rang to say that I had left it hanging on the door. He said it wasn’t there and asked where we had left it. I said the front door. Ah, he said, “no one uses the front door”.  When he looked it was gone. There had been someone standing outside further down the street and we wondered if she had seen us drop it off stole the cake.  I had a spare cake in the freezer, he was in, so we walked round…and knocked. Fortunately, someone was in and told us Joe lived next door! So Joe got his cake.We reduced misunderstandings by each explaining more fully what we had thought.  Shortly after, Joe’s neighbour discovered the cake on his front door–so Joe ended up with two birthday cakes.

Below are the texts–work out our wrong assumptions and how they might have lead to conflict. 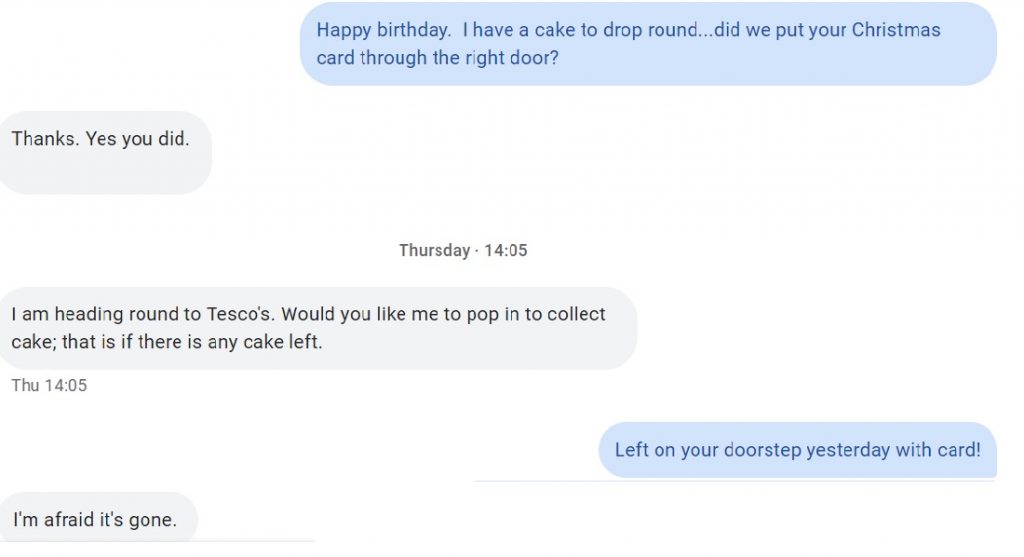 How to Reduce Misunderstanding

First, accept that there is more than one truth

This is extremely hard to accept surely it’s either true or not. If I am right, you must be wrong. John Sturrock ,  a great mediator and trainer uses cheese as a metaphor for truth. 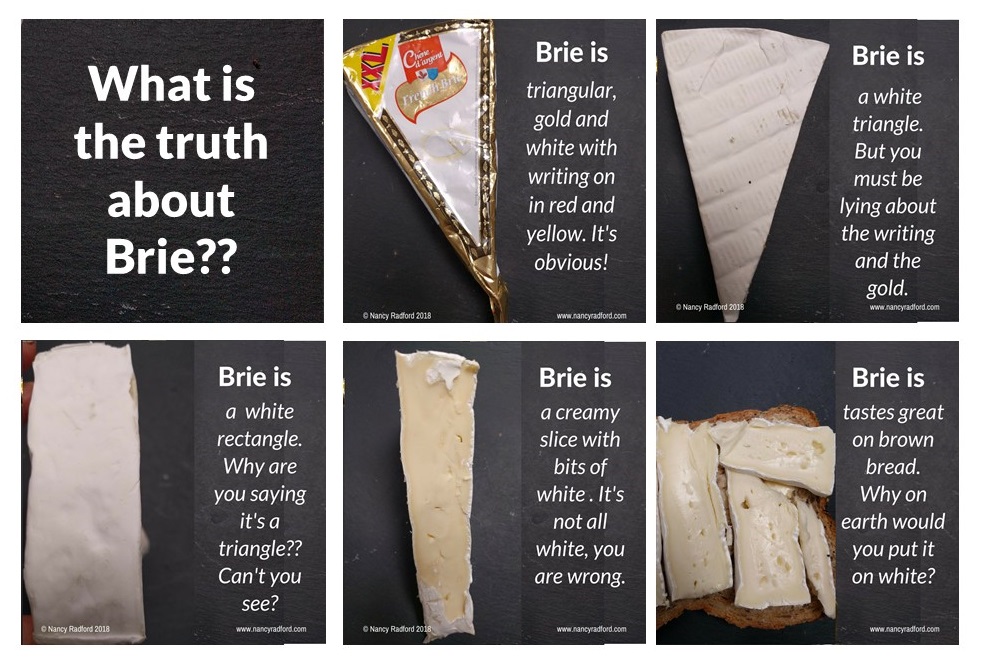 We assume that others see the world as we do, have the same values, beliefs, experiences and understanding. So we don’t understand why someone got so upset about a comment we made lightly. We blame them for getting upset about something minor.

Yet, think about a time when a comment about your behaviour/appearance upset you enormously and another time when the same thing did not bother you at all.  It comes back to how we interpret the event and the “stories”  we tell about the comment. The A5 Triggers exercise, by helping you to understand yourself, will help you understand others. 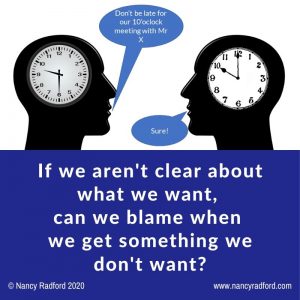 Third, be clear about what you want

The manager complained that Jenny had a poor work ethic. “Despite telling Jenny to come on time to an important meeting, she arrived after the customer.” Digging a little deeper into what on time meant was enlightening for both Jenny and the manager.

For the manager, “on time” meant Jenny arriving 30 to 15 minutes before the customer was expected, to make sure all the documents were ready.  For Jenny, “on time” meant arriving when the meeting was scheduled. When we reduce misunderstanding, judgments change.

If in doubt, ask if you can before jumping to conclusions

Fourth, Get your story straight 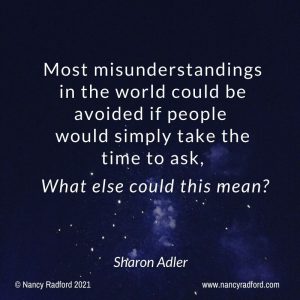 If we can’t ask and we don’t know, what do we do? First, remember that People do NOT do things to annoy you. People act in the way they do because they believe that doing so will help them meet their needs.

Just ask yourself, why would a sane person behave that way?

Is my interpretation the only one that is possible? The A5 Story Exercise will help you evaluate whether your story is likely to be true–and what is most helpful.

Finally, remember what is important

When thinking about how to proceed, think about what you really want from the encounter. In the case of the birthday cakes, the important thing was not whose fault the misunderstandings were. If we had blamed or complained about that, the kindness and appreciation would have been lost.

If Joe had not had the courage to ask about the cake, I may have told myself how ungrateful a person he was. He may have felt let down that I had promised a cake and not delivered.

Or perhaps the neighbour would have been accused of stealing the cake. Believe me, I have done enough neighbour mediations to know that even such a small thing can set off years of feuding.

If you still don’t know what to think or do, follow the advice of John Sturrock

“We need to continue to find ways to offer hope and help. To do that, we must continue to communicate. And if we are not sure what to say, let’s just say the kindest thing.”

For more help to reduce misunderstanding and improve communication

What do you need? Information on services I offer 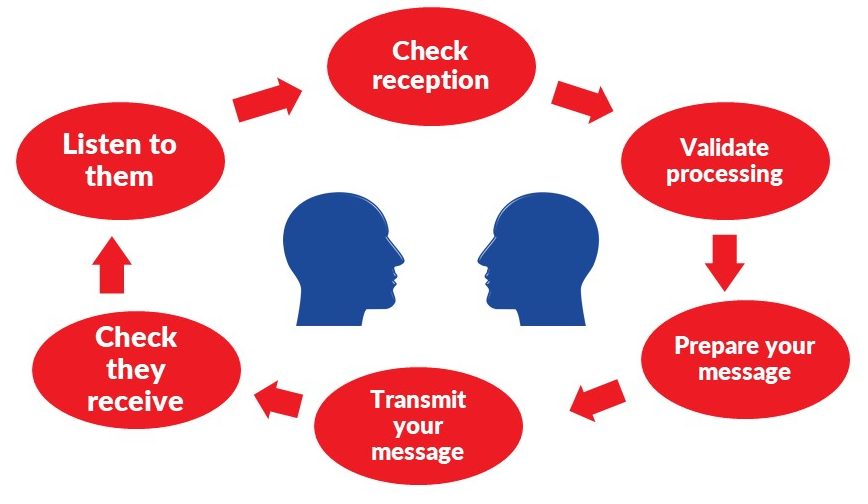